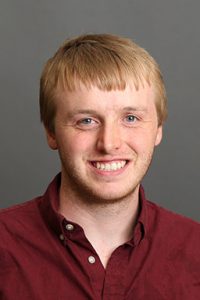 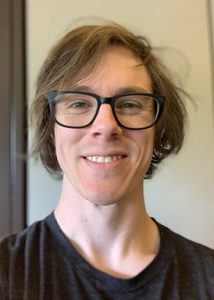 Meet Will Olson and Kyle Quinney, the 2019 recipients of the CMB Exceptional Thesis Award. This award is given in recognition of the distinguished work contributed by a student during the completion and defense of their thesis. Each recipient has earned a $250 reward in addition to the placement of their name on a plaque that can be found in the Bock Laboratories Penthouse.

William (Will) Olson’s path into graduate school was a fairly common one: he enjoyed biology, so he initially thought he would go into medicine. After joining a public health lab during undergrad at University of Oregon, he was drawn to academic research. He started graduate school expecting to follow the classical academic track. His thesis entitled “Understanding the Unique Metabolism and Host Manipulation of Toxoplasma gondii” earned the CMB Exceptional Thesis Award.

During his PhD research in the Knoll Lab, Will focused on two major goals: uncovering novel metabolic pathways of the parasite Toxoplasma gondii, and understanding how T. gondii infection changed the metabolic pathways of their hosts. He built the project on the kind of academic collaboration UW-Madison prides itself on; his project brought together the T. gondii expertise of the Knoll lab with the metabolomics expertise of the Amador-Noguez lab. During infection, T. gondii does a “kiss and spit”, injecting proteins and lipids into the host cell before invasion that alter the host cell’s metabolism. Will explored which host pathways were affected by this cocktail during the course of infection in order to understand how these changes may support T. gondii growth. During this research, he also discovered a new enzyme in T. gondii: Sedoheptulose Bisphosphatase (SBPase), which had been identified in bacteria, but never in this protozoan parasite. SBPase is part of a secondary pathway to generate the riboses that are required for DNA and RNA Synthesis. Excitingly, Will found SBPase was important for parasite growth and replication but was not present in humans, making it a potential drug target to develop new therapies.

After this conventional path into academia and clearly excelling at research throughout the years of his PhD work, Will is breaking the mold with his next steps: he has just finished up his first year at Marquette Law School.

Will says, “I’m gonna miss the academic environment. The positive, curious, supportive, interested culture.” Being “surrounded by some of the smartest people in the world on a daily basis is pretty cool.” So how did he end up in law school? He got exposure to patent law through a WARF ambassadorship, and becoming a patent attorney seemed like the perfect fit given his love of writing and talking about science.

“I’ll really enjoy still getting to interact with scientists and getting to hear some of the better work they’ve ever done because they’re trying to patent it.” This summer, he’s interning at the law firm Foley and Lardner in their IP office, learning and lending his biochemical expertise.

When not engaging with science and the law, Will organizes with the group he co-founded Milwaukee Democratic Action, he cooks (no, he hasn’t made any sourdough while under stay-at-home), and he and his wife Emily walk their two adorable dogs Tillamook and Leinenkugel.

It comes as no surprise to me that Kyle Quinney is one of the winners of the 2019 CMB Exceptional Thesis Award. Kyle received the award for his thesis, ‘Spatiotemporal assembly of the ESCRT machinery in living cells’.

Kyle’s love for science stems from his love of working through cell biology problems, “They are a nice mix of mostly logical but a slight bit of abstract thinking, and they create beautiful pictures.” As an undergrad at The College of Idaho, Kyle majored in biology and chemistry. During this time, he gained research experience working on several different projects that included research on heat sensing ion channels, heavy metal bone cell toxicity, and a summer internship at MIT where he studied DNA damage.  He quickly discovered he enjoyed cell biology research and microscopy. Kyle chose the CMB program to pursue his Ph.D. because it offered him a vast choice of faculty studying a diverse set of topics.

Kyle’s affinity for microscopy led him to join Jon Audhya’s laboratory. In the Audhya lab, Kyle studied how stimuli, such as growth factor, promote prolonged cellular activity of the ESCRT machinery. Since previous studies in the field had been done using ectopic over-expression of fluorescently tagged ESCRT components, Kyle set out to create functionally tagged components using CRISPR/Cas9 gene editing technology. Using the cell lines he created and advanced microscopy techniques like STED and lattice light sheet microscopy for live cell studies, Kyle was able to visualize the native spatiotemporal distribution of the ESCRT components on endosomes. His study showed that upon stimulating starved cells with growth factor, each of the ESCRT components remained associated with endosomes for a considerably longer duration, acting repeatedly to internalize cargo and down-regulate cell signaling. Kyle’s research led to a better understanding of endogenous ESCRT dynamics.

During his time at the Audhya lab, Kyle mentored several undergraduate students and oversaw projects assigned to rotation students.  He also received the Molecular Biosciences Training Grant and was selected to present his work at a Gordon Research Seminar.

One of the most important lessons Kyle learned during his PhD is working through tough problems that do not seem to have a solution. He also developed the skill to communicate his science confidently and effectively, “People really cared a lot about what I was working on when I talked with confidence.”

He advises current graduate students to have a non-science hobby, “Because if you never shut off when things are going poorly, it’s hard to feel mentally fit.”  He acknowledges that this advice is a hard to follow at times.

Kyle is now a post-doc in Dr. Anna Akhmanova’s lab at Utrecht University in The Netherlands studying kinesin motors and ER morphology and functionality. He chose Dr. Akhmanova’s lab because he wanted to study ‘something halfway different from his PhD work’. Moving to a different county is a big decision, but Kyle wanted to get outside his comfort zone and experience other scientists and places.

Outside work, Kyle likes to spend time with his dog Bumi, play video games, go bouldering, and biking. He is also the person I look to when I want suggestions for good music, podcasts, and TV. Fun fact about Kyle: he knows random facts about most things!