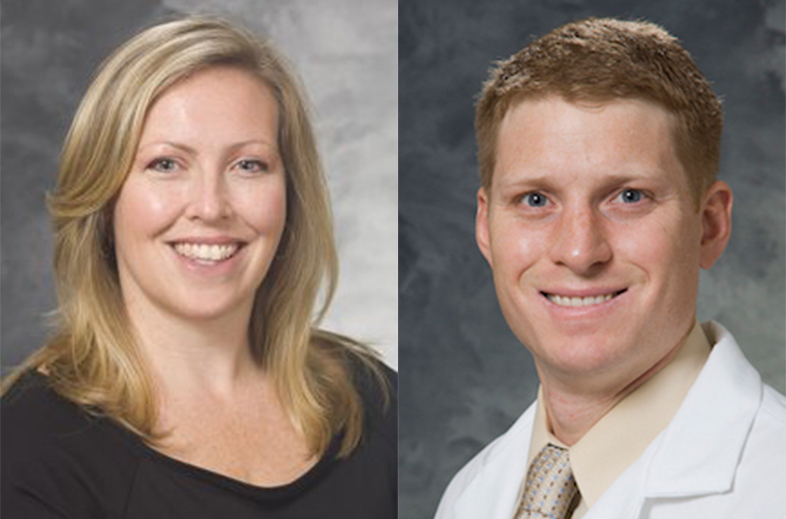 Congratulations to the two recipients of this year’s Shaw Scientist Awards from the Greater Milwaukee Foundation, Darcie Moore and Zachary Morris, who are also both CMB trainers!

The awards come with $200,000 in seed funding to support innovative research approaches and the career development of young investigators.

Moore is studying adult stems cells in an area of the brain important for learning and memory. A decrease in these cells over time is associated with cognitive decline, so Moore is exploring how stress and aging change the process by which the cells divide.

Her lab has found that aging leads to differences in the proportions of damaged proteins that each cell inherits in the process of division. She now seeks to determine how proteins involved in this process interact, with a goal of identifying potential therapeutics that could either interrupt or promote such interactions.

“This award encourages out-of-the-box thinking and provides young researchers with important flexibility in addressing research questions whose outcomes are not entirely known,” Moore says. “Support of this type of high-risk science enables novel discoveries to be made.”

Morris’ research focus is on how different doses of radiation therapy may impact the ability of a patient’s immune system to recognize their cancer and how radiation dose may affect the susceptibility of cancer cells to that immune response.

Building from that understanding, Morris plans to test whether brachytherapy — a particular type of radiation therapy that involves implanting a radioactive “seed” in a patient’s tumor — improves the tumor’s response to certain immunotherapies. Melanoma will be the first cancer tested, with the expectation of expanding this research to a wide variety of tumor types.

“In today’s research funding climate, philanthropic support plays a critical role in the development of new concepts, enabling researchers to take new ideas and advance these to more substantiated concepts with preliminary data to support their feasibility,” Morris says. “Without such support, it is very difficult to pursue the research needed to move new ideas into viable concepts for grants. Yet, those new ideas are the critical engine for innovation in science and medicine.”

The Shaw Scientist Awards program began in 1982 thanks to a $4.3 million bequest from Dorothy Shaw, widow of James Shaw, a prominent Milwaukee attorney. In addition to $2 million in special grants, the Shaws’ fund has awarded nearly $15 million in grants to 78 scientists from UW–Madison and UW–Milwaukee. An advisory panel including scientists representing major U.S. research institutions recommends the winners.

Founded more than a century ago, the Greater Milwaukee Foundation is the region’s largest community foundation and was among the first established in the world.

“Wisconsin is brimming with talent, and by rewarding innovation, philanthropy can provide incentive for talented people to stay here, or relocate here, and contribute to bettering the health of others,” says Ellen Gilligan, president and CEO of the Greater Milwaukee Foundation. “Congratulations to this year’s Shaw Scientists, whose promising research honors the goals of our visionary donor, Dorothy Shaw.”