Skip to main content
University of Wisconsin–Madison
Imagine you’re a plucky, golf ball-sized squid swimming in the clear blue ocean on a moonlit night. Your round shape means a distinctive shadow casts on the ocean floor thanks to the light of the moon, and predators are looking for prey by night. How do you, a small piece of prey without a protective shell, hide yourself in a sea full of predators?

If you were a Hawaiian bobtail squid, you’d employ a process called counter-illumination to create a natural camouflage in moonlit waters. The light — produced by the mutualistic bacteria Vibrio fischeri within the squid — is cast downward to eliminate the shadow and prevent predators from seeing a silhouette of the squid when looking up. 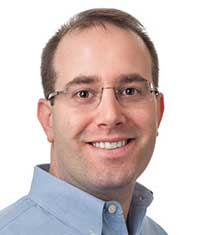 University of Wisconsin–Madison Professor of Medical Microbiology and Immunology Mark Mandel studies the genetic relationship between the bacteria and their squid hosts. But he didn’t start his scientific career studying bacterial camouflage. When he was working toward his doctorate, Mandel examined genetic regulation in E. coli before deciding to dive further into the relationships microbes develop with other organisms.

“The bobtail squid is special because it has just one bacterium that colonizes in a dedicated organ in the animal, so that allows us to look at the natural processes that occur,” Mandel says. “Our main approach is to mutate the bacteria and look at what changes in the colonization. If it does change, it’s likely the gene we interrupted was important for colonization.”