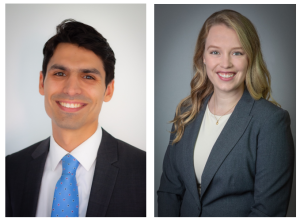 Mazdak Bradberry is one of this year’s recipients of the Raymond L. Erikson Exceptional Thesis Award for his thesis, titled “Excitation-secretion coupling in health and disease”.

Mazdak, who goes by Maz, is a graduate of the Medical Scientist Training Program (MSTP) at the University of Wisconsin-Madison, receiving an M.D./Ph.D. sponsored by the Cellular and Molecular Biology graduate program and the UW School of Medicine and Public Health. He first grew up in Southern Connecticut before moving to Pittsburgh with his family. Maz was exposed to science through his parents who are both academic science faculty and through an internship at the National Institutes of Health early during his college career. His mother was the first person to tell him about M.D./Ph.D. programs, and he took interest in the thought that medical training could give him additional insight on the importance of biological phenomena in a clinical context. After his first three years of medical school, Maz completed his Ph.D. in the lab of Dr. Ed Chapman in the department of Neuroscience, where he studied protein-lipid interactions related to the synaptic transmission of neurons. Maz recalls spending time at the beginning of his research tinkering with an unused microscope in the lab, eventually using it for many of his experiments after building an illumination system and learning patch-clamp electrophysiology with the help of some other tools around the lab. “For me,” Maz says, “the act of learning how something works, and especially figuring out how something works, is one of the most satisfying, energizing things.” The projects that Maz pursued in the Chapman lab revolved around proteins that function as calcium sensors for exocytosis in neurons, namely synaptotagmen (syt) 1 and Doc2, as well as the synaptic vesicle (SV) transporter-like protein SV2A. Maz was very eager to collaborate with other labs on campus and especially keen to incorporate the power of mass spectrometry analysis with his work. He credits the collaborative nature of UW-Madison and the openness of his advisors to have allowed him to complete an additional short study in the lab of Dr. Joshua Coon in the department of Chemistry. While there, he learned techniques in mass spectrometry and analytical chemistry and worked on optimizing methods for synaptic vesicle purification through immunoprecipitation.

Looking forward, Maz plans to relocate to New York City to complete his residency in Psychiatry at Columbia University. He is excited to return to clinical work and for the stipend that he was granted to pursue research in the later years of his residency. We are very happy for Maz and wish him all the best in his future endeavors!

Katarina Braun is one of this year’s two recipients of the Raymond L. Erikson Exceptional Thesis Award for her thesis, titled: “Embracing randomness: within- and between-host evolution in two RNA viruses”.

Katarina, who goes by Kat, grew up in Buffalo, New York, on a small farm with her veterinarian parents before moving to the suburbs of Milwaukee. Kat remembers catching the “research bug”, as she calls it, during her undergraduate studies at the University of Wisconsin-Madison with Dr. Marina Emborg, M.D., Ph.D., in the Department of Medical Physics. Her work in Dr. Emborg’s lab focused on studying neurodegenerative disorders in primate models at the Primate Center. Kat attributes Dr. Emborg’s mentorship as the critical foundation of her studies and the start of a big turning point in her academic career. While in the Emborg lab, Kat was introduced to the possibility of pursuing MD/PhD programs and was encouraged to shadow a fellow doctor treating Parkinson’s patients at the Veteran’s Affairs (VA) hospital on campus. This eye-opening experience and her advisor’s enthusiastic support ultimately led Kat to apply and join the Medical Scientist Training Program (MSTP) at the University of Wisconsin-Madison and stay in the area to pursue her M.D./Ph.D. studies.

After completing her first three years of medical school, Kat joined the lab of Dr. Tom Friedrich in the Department of Pathobiological Sciences to study the evolution of RNA viruses and their capability to emerge from a zoonotic reservoir to cause diseases in humans. Kat’s studies focused on the avian influenza subtype H7N9 and its transmission among ferrets, a common mammalian model for respiratory infection because they are one of the only mammals which transmit viral infections by sneezing. The process of assessing viral evolution involved setting up subjects for viral transmission, taking nasal swabs of recipients, performing deep sequencing analyses of the virus, and assessing if and how the viral genome is changing over time by comparing sequences between hosts. Kat was then able to use this data to investigate what selective pressures the viruses may be under and how they appear to be evolving. Mid-way through her graduate research, the SARS-CoV-2 (or COVID-19) pandemic caused Kat’s research to quickly pivot. Kat collaborated with Gage Moreno, an alumnus of the Cellular and Molecular Pathology program and Dr. David O’Connor’s lab, to use their viral genome sequencing techniques to characterize the SARS-CoV-2 transmission in southern Wisconsin. At one point, the two graduate students found themselves sequencing viral samples from the entire state of Wisconsin. “I recognize that my experience early in the pandemic was really different from others”, Kat says, explaining that she views this as a “very challenging, but privileged position in that I was able to keep working at a time when others weren’t, all while many people were sick or dying.” Kat shares that she was grateful to do any part she could to help others, adding that “it was the first time that the science I was doing really mattered for the health of the people in my community and it was a really motivating factor for me.”

In finishing her tenure in Madison, Kat has decided to pursue her residency in Obstetrics, Gynecology, and Reproductive Sciences at Yale School of Medicine. She plans to utilize her skills developed through her many research experiences to study infectious disease in the context of pregnancy and investigate viral-placental interactions. We will miss her and wish her great success in this new stage of her career!