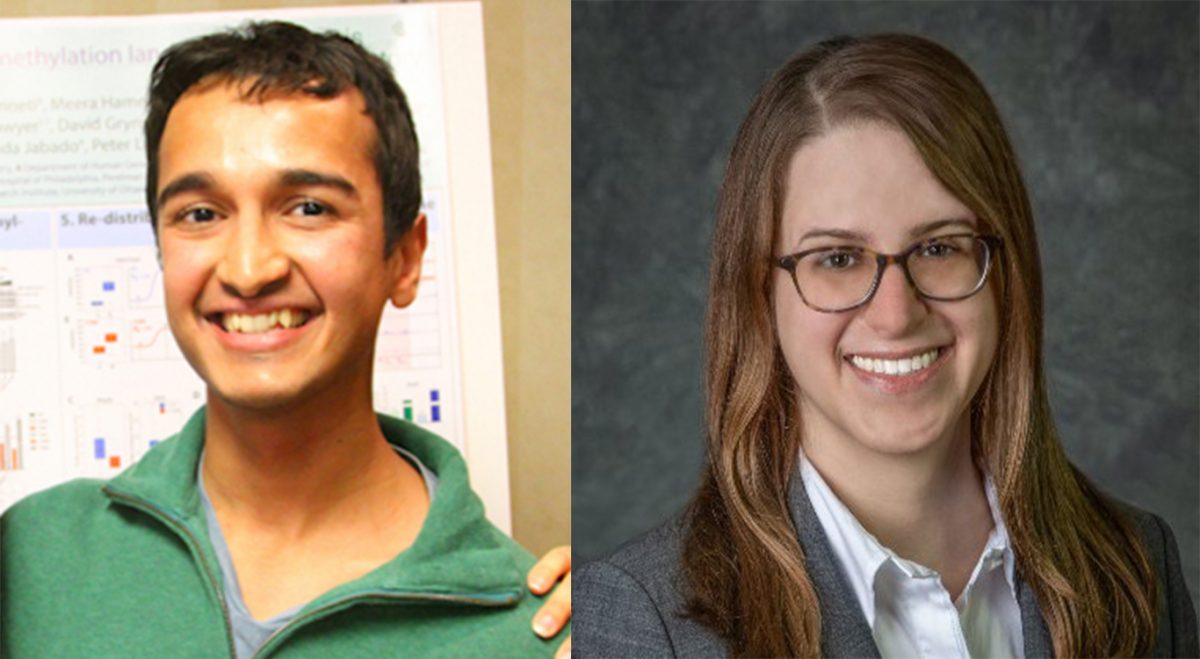 We are excited to announce that Sid Jain and Amelia Haj are the inaugural recipients of the Raymond L. Erikson Exceptional Thesis Award. This annual award honors CMB students who have written and defended an exceptional thesis. A fund to support the award was created by family and friends in honor of Dr. Erikson who died last year. Dr. Erikson was the second student to graduate from CMB, and during his career he made many important discoveries, including the identification of the first oncogene v-Src. Thus, recognition of Sid’s work on cancer and Amelia‘s work on viruses with the inaugural award bearing Dr. Erikson’s name is particularly fitting.

Before his time at UW-Madison, Siddhant grew up in a small town in central India dreaming of becoming a scientist. It was the allure of physics that captivated him at first, but his interests turned to biology when his dad was diagnosed with terminal colorectal cancer. This battle against cancer led him to pursue a scientific career in cancer biology.

In his undergraduate years, Siddhant developed a special interest in epigenetics– molecular mechanisms that regulate gene expression in cells. Through interaction with histone proteins, eukaryotic DNA is organized into repeating units that regulate spatiotemporal gene expression in cells.  Just a year before Siddhant started his graduate studies, recurrent mutations in histone genes were discovered in pediatric cancers for the first time. In the same year, Dr. Peter Lewis also established his own lab at UW-Madison to understand the function of these “oncohistone” mutations. “As I read through Peter’s research interests on his website, I knew right away what I wanted to study for my thesis project. His lab was perfect for me to pursue my interests in cancer biology and transcriptional regulation” Sid recalls.

As the first graduate student in the Lewis Lab Siddhant focused on two projects studying these oncohistones in childhood bone and brain tumors. Very little was known about these histone mutations at the time. Through his biochemical experiments, Siddhant found that mutated G34W/R- histones favored activity of a transcriptional repressor PRC2. He demonstrated that incorporation of mutated histones at certain regulatory elements within the genome favors a transcriptionally repressive chromatin state to drive cancer-specific gene expression.

In his last years of his PhD, Siddhant discovered a new protein that he termed EZHIP, a small protein that plays a role in a highly aggressive type of pediatric gliomas, posterior fossa ependymomas type-A. Through his scientific work Siddhant found that EZHIP mimics the sequence of a recently discovered histone mutation and directly inhibits the activity of the PRC2 transcriptional regulator. His experiments provided a biochemical explanation for the observed epigenomic profile of a highly aggressive form of childhood gliomas.

Siddhant talks about his experience in the CMB program and the Lewis lab with great enthusiasm. While there were many setbacks throughout his projects, he considered these challenges as part of the fun and enjoyed systematically solving them. “There were several days, weeks, and even months when my experiments would not work. But these roadblocks were a sign that the questions I was pursuing were novel, fascinating and noble.”

Today, Siddhant is continuing to pursue his passion for chromatin biology as a postdoctoral fellow in the lab of Dr. Cigall Kadoch at Harvard Medical School.

Amelia Haj was named one of this year’s recipients of the Raymond L. Erikson Exceptional Thesis Award for her thesis titled “Functional Consequences of Immunogenetic Variation in Rhesus and Cynomolgus Macaques.”

Amelia’s interests in virology and immunology began as an undergraduate at the University of Minnesota where she obtained a degree in microbiology. Amelia said, “I was always fascinated by how microbes are so crucial for, not only our lives as humans, but for life on Earth as a whole. I was also very interested in infectious diseases and how easily seemingly simple pathogens can bring us to our knees. I developed more of an appreciation for immunology in medical school, especially during my transplant surgery rotation.” Amelia was drawn to academic research early on in her undergraduate coursework and sought out the opportunity to further explore infectious disease research outside of the classroom. After her freshman year, Amelia joined Dr. Leslie Schiff’s lab and studied reoviruses. She always planned on going to graduate school, but was encouraged to apply to Medical Scientist Training Programs (MSTP) by a mentor in the Schiff lab. After graduation, she accepted a position in the University of Wisconsin-Madison’s MSTP and Cellular and Molecular Biology programs.

“Joining the MSTP at the University of Wisconsin-Madison was an easy decision not only because of its reputation for strong research and its variety of labs, but also because of its friendly and collaborative environment.”

During her MD-PhD, Amelia did her thesis work in Dr. David O’Connor’s lab at the AIDS Vaccine Research Laboratory. Amelia used a combination of novel bioinformatics tools and molecular biology assays to predict adaptive immunity to viral infections. She focused on developing an ultradense peptide array for high-throughput identification of peptides that bind major histocompatibility complex (MHC) class I and enable efficient CD8+ T cell responses.  Profiling these epitopes can be used for rational vaccine development. Amelia was awarded the Computation and Informatics in Biology and Medicine (CIBM) T15 traineeship for her innovative research, excellence in bioinformatics, and academic accomplishments. Amelia thrived in the lab and established a reputation as a talented communicator. One of Amelia’s favorite memories during her MD-PhD was when she gave a research presentation in Melbourne.  While there, she met  Dr. Peter Doherty, who won the Nobel Prize for discovering the role of MHC molecules. Amelia is also very proud of the accomplishments of two undergraduate students she mentored during her time in the lab – one, Gage Moreno, will be heading to a postdoc at Harvard, and the other, Jenny Lee, will be heading to a master’s program at Johns Hopkins!

Outside of the lab, Amelia sought out the opportunity to contribute to the other areas of academic research, including bioethics. She was selected for a Fellowship at Auschwitz for the Study of Professional Ethics (FASPE) Medical Fellow in 2018, which she describes as “one of the best and most meaningful experiences I have ever had.”

Amelia is looking forward to starting residency in clinical pathology at Massachusetts General Hospital in Boston and is excited to see how she can combine her research, clinical, bioethics, and design interests into her future career. We are all excited to see where Amelia’s next steps will take her and are confident that she will thrive in her future endeavors!

“It’s going to be exceptionally hard to leave Madison. The MSTP here feels like a family, especially the class that I’ve been with for the last eight years, which has made my time here incredibly enjoyable, but also makes it really hard to say goodbye.”